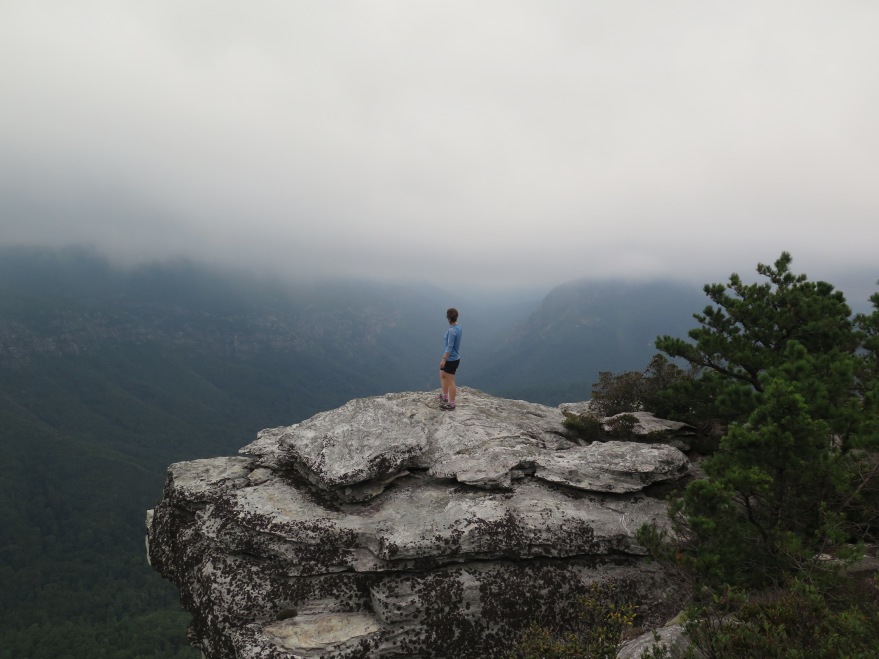 Veggie gazes out over the gorge from Shortoff Mtn.

Pro tip: if you’re traveling to or from Asheville, you can access some of the best parts of the gorge – Table Rock, Hawksbill, The Chimneys, Shortoff – from the Table Rock Parking Lot. Stupendous day hiking along the ridge (and good picnic spots). Not exactly “on the way,” but worth the side trip.

Trail’s a bit overgrown. Can you find the MST’s white-circle blaze?

We took the chance to explore the gorge over a weekend and knock out a few miles of MST section 4. For those interested in a similar hike, here’s a brief rundown of our itinerary:

Two nights. 18ish miles total. Dropped in at Old 105/Kistler Memorial Hwy (beautiful views along the road, but make sure you are in a high-clearance vehicle). Climbed over “The Pinnacle,” before a sharp descent to the Linville River with views of Shortoff Mountain along the way. We decided to wade across the river that night. It was placid and wide, as it typically is. Camped the first night at an established campsite with a big group of fellow weekenders. Next morning began with a gnarly climb up from the gorge, fortunately with cloud cover. We were expecting rain, but got only crisp gray instead; welcome on an August day in NC, even in the mountains. Stunning views of lake James behind us. Reached top of Shortoff and peered down into the gorge. Fun to see the rest of our day ahead of us. Continued our ridge walk to the Chimneys, encountering a strenuous climb, made more challenging by the sun, which had finally emerged. Climbers and “high-liners” were navigating The Chimneys with rope and harness – a bit too daredevilish for us, but impressive. Reached Table Rock, which we summited. It was cloudy, but the view of the disappointed onlookers wasn’t too bad. Finished the day with a rolling descent on broad, leaf-littered trail to our campsite near Bucks Creek. Next morning we skirted along Steels Creek, which was truly rushing at times, and exited where the trail crosses NC 181.

Like the Appalachian Trail, the MST in this part of the state can seem unforgiving: rocky, rooty, devoid of switchbacks. But it’s rewarding walking. The section through Linville Gorge is no exception. We recommend it highly!

Looking out onto Hawksbill in the distance.