What a week it’s been! I apologize for all of the drama and confusing goings-ons in the previous blog. Last you heard from us, we thought we were stranded in Glencliff, NH “until further notice,” or whenever the USFS decided to open the White Mountain National Forest. Along with our fellow thru-hikers, we melodramatically hypothesized that this meant we would be stuck in Glencliff for many days, potentially jeopardizing our trek. But! We awoke the following morning to find that the forest had been opened that very day.

Welcome to the Whites.

Thrilled, we got a late start after sleeping in, and headed up Mount Moosilauke – our first real White Mountain, and our first hike above treeline. The trail was flooded and swampy at parts, but it was a beautiful day, and we didn’t seem to mind. It wasn’t until we had to hike down the infamous backside of Mt. Moosilauke that we had a bit of a wake-up call as to how hard the upcoming sections would be. (We had been warned, but somehow it’s hard to believe all of the hype until you’re there.) Crawling down the mountain, alongside a waterfall, I took a tremendous spill – a sign of many more to come. We got into camp very late that night, and realizing how slow our pace had become on these strenuous miles, we reassessed our schedule for the upcoming section.

Thru-hikers often have a “love-hate” relationship with the White Mountains. First of all, the “love:” they are stunningly beautiful, and much of the hiking is above treeline and over 4,000 feet, which is unlike anything we’ve encountered on the trail thus far. On a clear day, you can see for miles, over mountains and into the valleys below. For the “not-so-much-love” part, the terrain becomes incredibly difficult (more climbing and crawling than hiking) and at times treacherous, your pace slows (from 2-3mph to 1-2), the weather can change at any minute and become dangerous (Mt. Washington notoriously has “the worst weather in the world”), and because of the mountains’ popularity, the places to stay are limited to expensive huts and pay campsites (thru-hikers are a thrifty bunch, so this is a particularly rough adjustment). Overall, we’ll lean towards the “love” side of things, but many bruises and rain storms later, we certainly can see both sides of the coin.

Our first days in the Whites, we had excellent weather. Our views as we hiked along Franconia Ridge and up Mt. Lafayette were spectacular. We were on an hiking high, until we went up Garfield Mountain, where dreams go to die. Somewhere up the steep climb and down its vertical waterfall descent, my quad began to hurt very badly, and we stopped for the night at Galehead Hut after a slow and painful afternoon. If you’re lucky, the huts offer a few hikers the opportunity to work for stay and food each night. We were able to stay at three different huts, and ate lunch at most of the others, making it possible for us to make it through eight days of hiking while only carrying four days of food (also a good thing because the road where we had planned to get out to resupply had been washed out in the hurricane and was closed).

By day four in the Whites, we planned to get off the trail to rest my leg, which didn’t seem to improve. Yet, when we got to the road where we planned to get off, we changed our minds, I took some Advil, and we pushed on. At first, that seemed like a crazy thing to do, but ultimately, it was the right decision – we were able to get two more days of amazing weather because of it, and my leg seemed to heal with time. 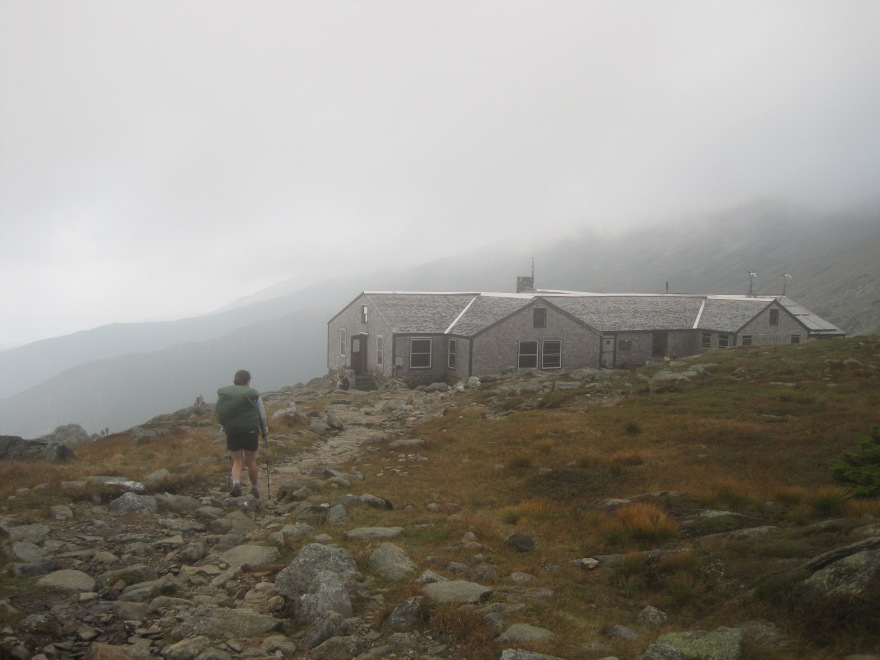 Approaching Lakes of the Clouds hut.

We made it to Lakes of the Clouds Hut on Saturday night; located at the base of Mt. Washington, the highest peak in the northeast, it is the biggest and most popular hut in the Whites, packed every night of the week. We slept on the kitchen floor and headed out early for a clear morning on the summit. At 6,288 feet, Mt. Washington is something to behold, and is perhaps most famous for its high wind speeds (highest ever recorded) and horrible weather. Thankfully, we experienced neither, though once we descended, the mountain was once again shrouded by clouds.

It’s hard to describe the beauty that we witnessed. We will post pictures when we can, and hopefully that will better convey it. The last two days have been on-and-off raining, causing many spills and slow miles, but we’ve persevered, met up with some old friends (Chimp, Domino, Whiskey and Holler!), made it to Gorham, New Hampshire, and found a cozy place to take a “near-o” at the White Mountain Hostel. 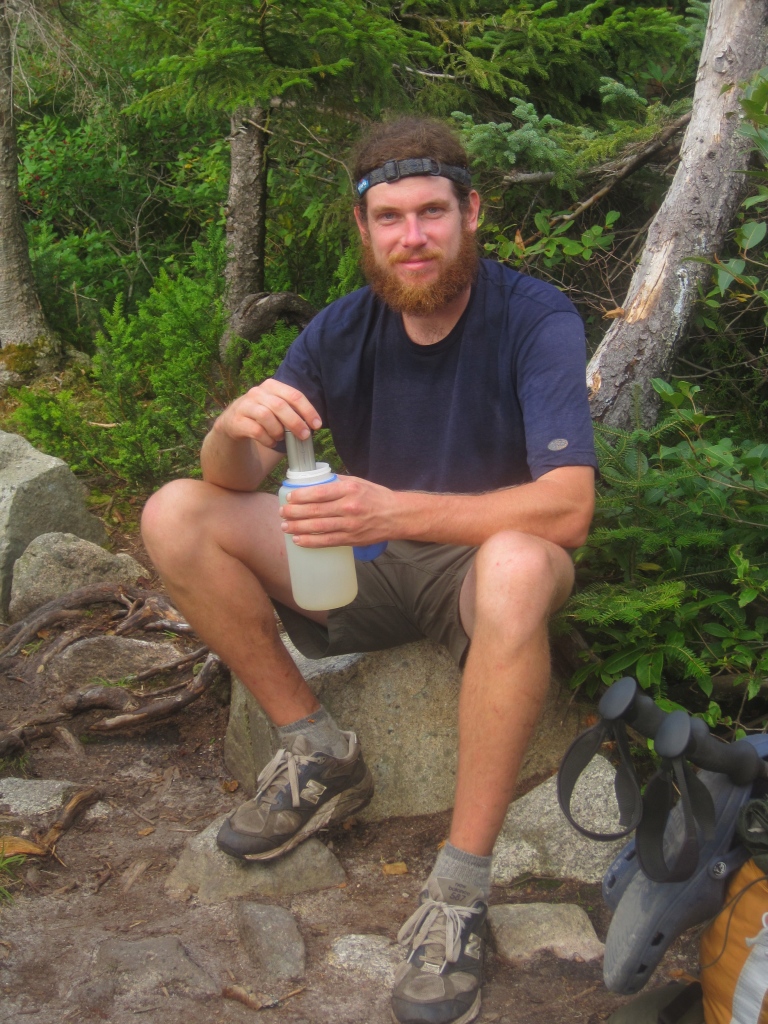 Chimp at the end of a long day.

We have less than 300 miles left on the trail, and less than 20 until we reach Maine. We estimate – and hope – that we will reach Katahdin in just over three weeks. There are many variables, and the next 150 miles are considered to be very difficult and rugged, so we’re not out of the woods yet, so to speak. But we’re savoring our time with our fellow thru-hikers and trying to make the most of our last month.