Greetings from Hiawassee, Georgia! We’re one week into our journey, and, after getting a one-day late start, we have caught up to our original itinerary. In fact, we’ve probably been pushing too hard (say many seasoned thru-hikers, who all advise starting slow). So, from here on out, we are planning on sticking to our very reasonable schedule, averaging 11 miles per day per week, and then increasing the weekly average by a mile each week (got it?). So far, we are both feeling strong, though Zack has had a few blisters and a tricky knee (the day in town will do him good). Almost a week in, we are loving the journey and are excited about what each day holds. We’re learning all sorts of new things everyday, and exploring unbelievably beautiful parts of the country that we would never have seen otherwise. We’ve each said, “Can you believe this is just out here for anyone who wants to find it?” It’s amazing, and we feel very grateful to experience it. No matter how far we get, it’s been worth the trek! Here’s what we’ve done so far.

The best cake ever. Chocolate Peanutbutter from Atlanta’s Cafe Sunflower.

Day 1 Amicalola Falls to Springer Mountain Shelter (9 miles)
Mr. Ezor, Mrs. Ezor and Mrs. Goodrich dropped us off at Amicalola Falls for the start of our trip. Zack’s pack weighed in at 39 lbs, and mine at 35 lbs. That’s heavier than we’d hoped, but so far it’s been managable. And, with goodbyes and a few tears, off we went! Up the beautiful falls on a gorgeous day, though 425 steep steps is not necessarily the most encouraging way to start a 2,181-mile trek. Most people hike the Amicalola approach trail, but it’s not technically part of the trail. (The trail doesn’t official begin until you reach the top of Springer.) So, of the 9 miles we hiked our first day, only 0.2 counted towards the grand total. Can you believe that? But, anyway! We made it to the top of Springer Mountain around 3:00pm, where we took some fun pictures and signed the AT log book, which means we officially became [aspiring] thru-hikers!

Atop Springer Mountain, the southern terminus of the AT.

Day 2 Springer Mountain Shelter to Gooch Gap Shelter (15 miles)
After camping out at Springer Mountain Shelter/Campsite, we began our planned 7.6-mile day, but when we reached our destination before lunchtime, we decided to move on to Gooch Gap Shelter, the next AT shelter, which was an additional 8 miles. Phew! Long day of hiking, but it felt good to know that we could do it, and we had a great night with fellow thru-hikers at Gooch Gap.

Day 3 Gooch Gap Shelter to Neel’s Gap (15.5 miles)
Zack said that we should wait to see if we were still enthusiastic about hiking when we came upon a day that was “cold and raining sideways.” Day 3 was that day. Up until then we’d had sun and clear skies, but on Friday, a thick fog settled over the mountains, and as the temperature dropped, the rain came down in spurts. At a cold lunch break, we were informed that the campsite where we had planned to be for the night was closed due to bear activity – as were the campsites within a 5-mile radius of it – which led us to our second 15-mile day in a row. We decided to push on to Neel’s Gap, where the trail passes through a mountain supply store, and a few nearby hostels welcome hikers. When we arrived, we found out that a huge storm was coming our way, so we were even more grateful to be under a roof that night (as if bears weren’t reason enough).

Day 4 Neel’s Gap to Low Gap Shelter (10.6 miles)
At Neel’s Gap we got our first MAIL DROP! Zack had packed one for us a few days before we left home, and we promptly discovered that we had sent ourselves way too much food. Like whoa. We went through everything in the mail drop, as well as everything we had in our packs, and donated 15 or so pounds of food to the “hiker box” at Neel’s Gap, for hungry hikers to take. It was actually a good thing, because now we know how much food we can actually eat and carry (at least at this point – they say that after a week or two your “hiker appetite” kicks in, which is a whole different kind of eating). I had a cup of much-needed coffee at Mountain Crossings before heading out, and the guy who rang me up had the quote of the day: “Yeah, I used to drink coffee too, when I had a real job. Then I hiked the AT…Now, I don’t drink coffee. And I don’t have a real job.” After heading out of Neel’s Gap, we had a nice mid-length hike to Low Gap, where we camped with a Boy Scout troop from Decatur, GA. The Boy Scouts’ dads were nice enough to clear some room at the campsite for our tent. It was a cold and windy night. 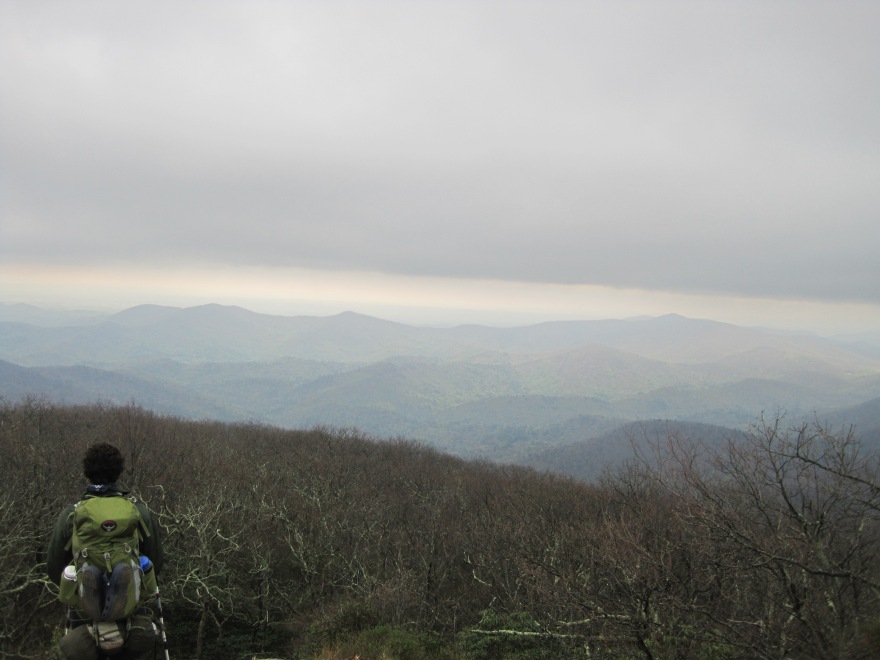 Before descending into Neels gap.

Day 5 Low Gap Shelter to Blue Mountain Shelter (7.6 miles)
We started our day off right, with our first bit of “trail magic” from the Decatur Scout masters – hot coffee (always my favorite), a Powerbar and a Hershey Bar! We decided we wanted a slow day, so we hiked under 8 miles. We got to Blue Mountain Shelter, a beautiful campsite known for its cold, windy nights, just after lunch and had a very relaxing afternoon writing, reading and working on our itinerary. We chatted with a fellow thru-hiker (trail-named “Mississippi Milkweed Puff”) who had made, by hand, a lightweight banjo so that he could take it on the trail with him. (He also built his own canoe and rowed down the entire Mississippi last year. Needless to say, he is a very cool dude.) The night ended up being very mild and nice, in spite of the windy warnings, and our legs appreciated the shorter day.

Day 6 Blue Mountain Shelter to Deep Gap Shelter (15.3 miles)
Another hard day! They say that Georgia is one of the hardest states on the Appalachian Trail because of all of the ups-and-downs. There are 25 major gaps in the 75 miles in the state – all of which you must painstakingly climb into and out of. (They say also that New Hampshire and Maine are the hardest, but by the time you reach them, you’re better trained, so you can handle them.) Yesterday was hard and hot. We pushed on though, and made it over Kelly’s Knob at the end of the day, with all the energy we could muster. We were very grateful to arrive at Deep Gap Shelter around 5:00, in time for a quick dinner with fellow thru-hikers, and then to sleep (at 7:45pm).

Day 7 Deep Gap Shelter to Dick’s Creek – Hiawassee, GA (3.5 miles)
It was time for a short day. As planned, we headed into Hiawassee today, a small town in north Georgia, 11 miles off the trail. In order to catch the shuttle from the trail, we woke up at 5:00am, and hiked out in the dark. I thought it was very spooky. Fortunately, we got to watch a brilliant sunrise over the mountains; unfortunately, my camera did not capture its beauty in full effect. Since arriving in Hiawassee, we have been very productive, and have enjoyed civilization very much (hot showers! laundry! grocery stores! internet!), and the day has only just begun. We’re planning on going out to eat tonight, which is very exciting, though I’m a bit nervous about the fact that my “nice” outfit is my hiking top, hiking shorts and Crocs, which are still the ugliest shoes ever made.

Thanks for all the encouragement and love! Happy Trails to all!
Lara (and Zack)

PS- We still don’t have our “trail names,” but we’re working on it.